Their best finish was the bronze medal in the South Asian Federation Games 2010 and a silver medal at the SAFF Women’s Championship 2016.

Bangladesh played their first game on January 29, 2010 against Nepal, in the South Asian Federation Games 2010, held in their own country, losing 1-0. They also played against three other countries, winning two games and losing one, notoriously 7-0 against India. Their second competition was at the end of the year in the 2010 SAFF Women’s Championship, also in their own home, but this time in Cox’s Bazar. They won significantly against Bhutan and Sri Lanka (2-0 and 9-0) and losing to India and Nepal in the semifinals, remaining out of the tournament.

The team took back their participation in the SAFF Women’s Championship in 2012, specifically in Group A with hosts Sri Lanka, Bhutan and India. They lost to India and Sri Lanka 3-0 and 2-1 respectively, but won to Bhutan 1-0 thanks to a goal from Pru Suinu at the 19 minutes, although that victory Bangladesh did not advance to the next round and thus ended eliminated.

Their latest games were the 2014 Women’s Asian Cup Qualifiers against Thailand, Iran and the Philippines, losing them all, having 15 goals against without scoring one and left out of the Asian Cup and 2015 Women’s World Cup, to be held in Canada from 6 June to 5 July 2015. 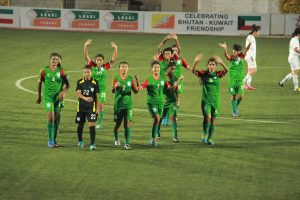